The Jacob F. Bryan III Library opened in the fall of the 1991-1992 school year. Professional staff provide students with support for research projects and other assistance. The library underwent extensive renovations in 2016 as part of the school's Lead the Way Capital Campaign and includes a state of the art learning center with three computer labs, a makerspace, extensive archives and rare book collections, a student art gallery, and spaces for students to collaborate on assignments or quietly study.

Episcopal completed the first phase of its campus master plan expansion project with the dedication ceremonies for two academic buildings, Parks and Lastinger Halls, on January 6, 2011. Named for one of the school’s founders, the late Reverend Robert Parks, and longtime Episcopal supporters, the Delores and Allen Lastinger family, the two new buildings encompass nearly 13,000 square feet of classroom space separated by an 8,000-square-foot courtyard. Each building houses 12, 900-square-foot classrooms, with the most updated technology available. The spaces encourage increased collaboration between students, interdisciplinary studies and allow today's student to learn in a facility that fosters academic creativity. The buildings incorporate columns and arches, outdoor hallways and second story open decks with views of the St Johns River and downtown Jacksonville.

The Episcopal community dedicated the Dale D. Regan Plaza as a lasting tribute to former Head of School Dale Regan on March 6, 2013. The Regan Plaza provides a safe place for quiet reflection or study and event space for special receptions.

Named for one of the founding members of the School, David W. "Dink" Foerster, this building is one of the school's original structures and houses classrooms.

Called the "G" building for "General studies," this building was one of the first on Episcopal's campus. Today the building continues to house classrooms, and is mostly used for humanities studies.

The Munnerlyn Center for Worship and Fine Arts opened in 2004, providing a multi-purpose space that includes the Deming Theatre, dance studios, music rooms, the Berg Gallery for rotating studio art displays, the Davis Chapel, and offices for fine arts faculty and staff. Deming Theatre provides a beautiful and professional setting for music, dance and theatre performances, including an 684 seat theatre.

A smaller fine arts performance venue, the "off-off Broadway" Sikes Theatre is located in the heart of campus. Named for Florence M. Sikes, a drama and theatre instructor for many years at Episcopal, the space allows for a more intimate setting for performances. The School is very grateful to Ms. Sikes for making such a significant planned gift to Episcopal that renovations of the theatre were possible. Students enjoy classes in the theatre, and the entire community benefits from the performances staged there.

The visual arts studios and photography building are located on St. Elmo Drive, creating a fine arts row. The ceramics studio is located near the Acosta House and the sixth grade center. The studios provide plenty of space for creativity, large scale projects, and storage for students' work. A kiln and dark room are available to students as well.

The Episcopal campus contains a significant historic building, the Acosta-Schmidt House, built in the late 1800s. Purchased by St. Elmo W. Acosta, a influential Jacksonville businessman and City Council member, in 1911 the property included an orange grove. It then became part of the ESJ campus after the founding of the school. Its wide porch is used for numerous school events, including Commencement ceremonies. It was rededicated in 2021 in honor of Founder and Trustee Emeritus Gert H.W. Schmidt, and houses the Advancement and Alumni programs. 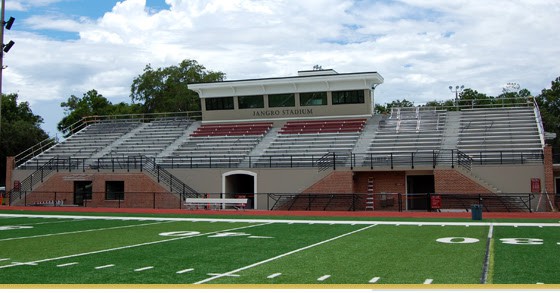 The McCormick Sports Complex includes Jangro Stadium and Pajcic-Hunt Field, both dedication in 2017 as part of the Lead the Way Capital Campaign, a FieldTurf playing field where football, soccer and lacrosse play, as well as Langford Track. Boasting full-service concessions, restroom facilities, a press box, picnic area and full stands, Jangro Stadium is a perfect place for families to enjoy a high-energy game!

Pajcic-Hunt Field hosts more than 140 competitions each year and features FieldTurf, the industry leader of artificial turf. FieldTurf, known for its peak performance, athlete safety and longevity, allows Pajcic-Hunt Field to be used year-round with minimal upkeep requirements. The Field, installed during the summer of 2015, was dedicated on October 23, 2015 and named for the late Gary Pajcic, a longtime school champion, and longtime Episcopal coach Charles Hunt. Click here to read more about Gary Pajcic and Charles Hunt.

Episcopal hosts local meets on its 400-meter long Langford Track, which has been refinished with a high-quality rubberized surface. With six lanes encircling Pajcic-Hunt Field, this campus feature offers runners a track that rivals many small college facilities.

The Elizabeth Simpson Walton ‘71 Aquatic Center was dedicated in 2017 as part of the Lead the Way Capital Campaign. It features a pool with boys and girls locker and changing rooms, an elevated spectator observation deck, coaches’ offices, restrooms and pool deck showers. The complex also includes a new pump house and pool system, allowing the pool to be heated and cooled, providing a single-temperature pool all year round for ESJ and AmberJax swimmers.

Randy Reese Pool was dedicated in 2017 as part of the Lead the Way Capital Campaign. Designed as a replica of the water polo pool used in the 1996 Atlanta Olympics, the Aquatic Center is one of Episcopal's premier athletic facilities. As one of only two 50-meter high school pools in Northeast Florida, the Aquatic Center is the only one that has met the minimum depth requirement to permit starting blocks to be used for races. The 10 lanes are kept warm in the colder months with solar covers.

Home to the softball team, Marchman Field is edged by the St. John's River and is considered to be one of Episcopal's most beautiful campus features.

Known as Episcopal's original gymnasium, the Alumni Gym was once used as Episcopal's chapel and the cafeteria. Today, the Alumni Gymnasium holds multiple classrooms, several offices, a publishing room and two locker rooms. The Middle School volleyball and basketball teams primarily use this facility for practices and games.

The River Field includes two practice fields which are frequently used by the football, soccer and lacrosse teams. The fields overlook the St. Johns River.

Opened in 1970, the Buck Student Center originally provided meeting space for chapel services and other school events. Today the Buck houses the dining facilities and Campus Store, and provides meeting space for student activities as well as special events such as the Senior Athletic Banquet in the spring.

The Episcopal Campus Store is located in the Buck Center on the Munnerlyn Campus. The store offers textbooks, spirit wear for children, students, and adults, a full line of uniform items, and school supplies.